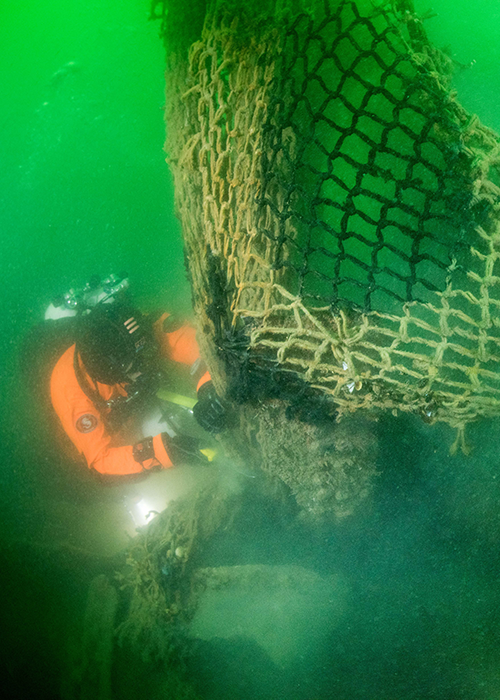 From June 10-12, our team of divers operated for the first time in the German Baltic Sea to retrieve lost fishing gear from the seabed.  Despite the unfavorable weather conditions, we were able to pull out 800 kgs of fishing nets, from 28 meters depth. The “catch” will be sent to Norwegian company Nofir, for recycling.


Following a survey mission in May 2019 we established that massive trawl nets were covering several shipwrecks near Rügen island, an area which is home to the endangered porpoises, the most vulnerable small whale population in Europe. In May, the German Ministry of Environment announced that some 203 porpoises were washed up dead in German shores in 2018. Most deaths were attributed to passive fishing practices, plastic pollution, climate change, and noise pollution.


Because of strong winds and choppy seas, our team was not able to perform 3 deep sea cleanups as planned. The first day we carried out 2 beach cleanups first on the Prora beach in the East of Rügen and then Glowe Beach in the North. We collected and properly disposed of 10 full trash bags of plastic, bottles, cigarette butts, polystyrene foam, jerry cans, and balloons.


On day 3, we stayed close to the harbour and performed a shallow water dive while NDR filmed our activities.


The operation was organised in partnership with Gesellschaft zur Rettung der Delphine (GRD), and sponsored by Trixie.


We would also like to extend our thanks to the surface volunteers:
Birgit Ischner (mission initiator and co-organiser), Harald Ischner, Stella Christofolini, Nicole Kaufmann and GRD staff, Verena Platt-Till and Franci Abute Grebe.