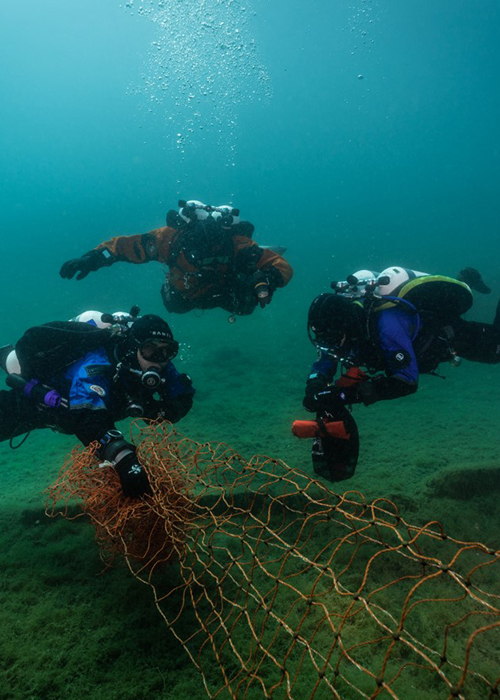 To setup a local Ghost Diving chapter is quite easy. To form a team, that is able to fulfil the task is quite a different matter, especially when there is a global pandemic and rules of engagements are strict.

Global standards in procedures were perused but theory is just one thing. To be efficient under water, the volunteers performed dry runs until everybody had the chance to slip into every role and act accordingly. It is surprising, how realistic a dry run can become, if you communicate only with hand signs.

In several session the deployment of lift bags was trained, bringing tension to lines and situation likewise which that had to be cut willingly and in full control of the situation. We deployed a former electrical sheep fence to act as a Ghost Net, this net was recovered over ands over again. What made the success of the combined team effort measurable was that the needed time until the net was lifted to the surface could be reduced every time.

Slow is precise, precise is smooth, smooth is quick. After each exercise, feedback was received and given so that we all could learn from each others point of view. Luckily for the newly formed team, we could profit from broad expertise as military and commercial divers from several our team members und most of all from an intensive knowledge transfer from our friends and neighbours from Ghost Diving The Netherlands.

Despite all the training and COVID19, Ghost Diving Germany participated with decentralized teams in GUE’s global clean-up day and collected a bunch of waste, that otherwise would have polluted our environment. More plans are in progress… stay tuned.