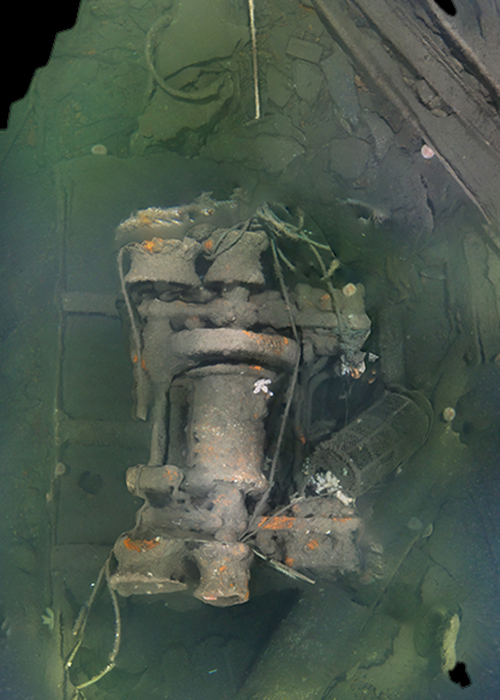 Photogrammetry. It’s the new ‘buzz’ word within the diving world and I am sure most of you will have heard of it by now. This modern technique allows for 3D models of the marine environment to be created, and this can be shared post dive. Whilst this technique allows for the generation of detailed wreck models which can contribute to marine heritage, it also has significant advantages in helping with diving projects such as Ghost Diving.

During the latest Ghost Diving expedition here in Newcastle, we planned on targeting the wrecks of the SS Mars and the SS Hanne. The SS Mars was a Swedish steam cargo ship measuring 80m in length and the SS Hanne was a steel hulled Danish cargo ship measuring 70m in length. Coincidently, they were both casualties of the German submarine, U22, falling foul to mines in December of 1939 within 8 days of each other.

Today, these wrecks are pretty broken up, but are commonly visited by divers in the North East who have highlighted the huge amount of lost fishing gear that the two sites host. This led to a Ghost Diving expedition, but before any nets could be lifted, a survey was required to identify the location of lost gear and any potential safety concerns.

Ordinarily, surveys rely on video footage or hand drawn sketches, but instead, the team utilized photogrammetric techniques to create a 3D model of the areas most affected by ghost gear. The generated model, shown in figure 1, far supersedes that of a pencil drawing or scrolling through video footage, and provides a blueprint from which a lift can be planned.

Doing just this, team leader Duncan Simpson designed and planned lifts, and over the following dives 18 pots and 125kg of netting was lifted from the two sites.

This was a tremendous result, and thanks must go to Hyundai and Healthy Seas for their ongoing support.

TECHNICAL DETAILS: For anybody that’s interested in the tech side of things, the orthomosaic image was created by using a GoPro 6, (filming 4k and 30 frames per second), with WeeFine 5000 lumen lights. Models were generated using Agisoft Metashape professional, overlapping 400 images, from roughly 3 minutes of footage.