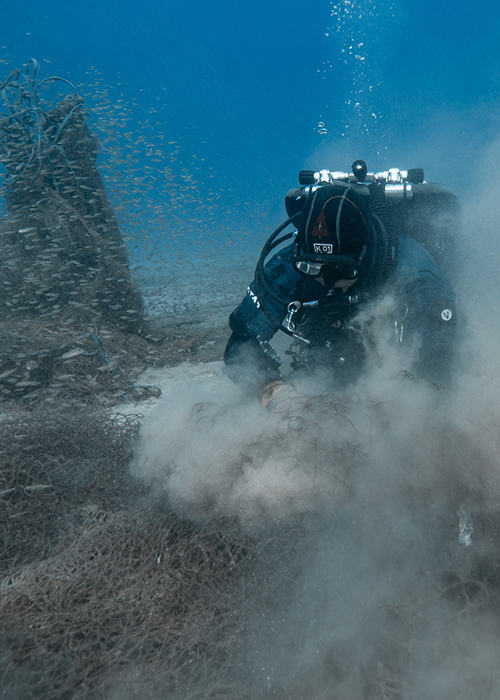 One sentence we always repeat, “if fishing is active in an area, there is ghost gear too”.

Ghost Diving initiatives have augmented globally to race with the amount of ghost nets and discarded fishing gear dispersed in our seas and oceans; therefore, the need for action has capitalized in our teams around the world, with groups of divers and communities coming together for the interest of our marine ecosystems health and the sustainability of marine species that are put in direct threat caused by Ghost Gear.

Our values and targets are always to grow and further expand our operations circumference in order to face these increasing challenges, while always on the lookout to clean and make positive impacts wherever we set foot.

As Ghost Diving Lebanon, and as an active chapter of the Global Mission by the organizations “Ghost Diving” and “Healthy Seas”, our next step would have obviously been nothing other then the expansion into our neighboring island “Cyprus”; with whom we not only share the same sea, but are also united by the responsibility to maintain a healthier ecosystem that protects what is considered one of the highlights of the EAST MEDITERRANEAN SEA area.

Over the past couple of months, efforts have been harnessed, actions have been planned, missions have been executed, and finally with lots of success, the decision for new shift has been made.

Ghost Diving Lebanon, has been given a new birth and renamed to Ghost Diving EAST MED, responsible for the coordination of ghost diving missions in Lebanon, Cyprus, and the surrounding East Mediterranean areas; with Imad Farhat acting as lead coordinator for Ghost Diving & our partner GUE instructor in Cyprus & Lebanon, future projects will be in effect over the year 2022 locally and internationally.