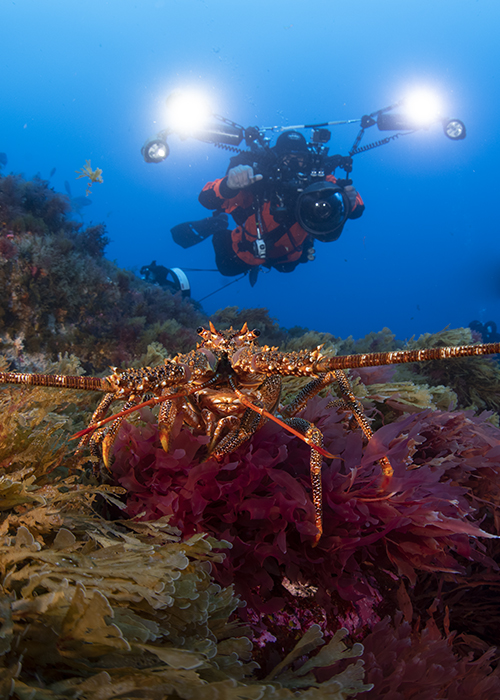 Cape Town – A team of Greenpeace activists, Ghost Diving and scientists on board Greenpeace’s iconic Arctic Sunrise have discovered a biodiversity haven on the Vema Seamount, 1 000km off the coast of Cape Town in the South-east Atlantic Ocean.

The return of this research expedition concludes the South African leg of the pole to pole ship tour which will continue in the South-west Atlantic before ending in the Antarctic.

“We don’t need to look far to find the beauty we must protect: the bountiful marine life we have found is a sure sign that seamounts are unique wildlife hot spots, critical to the resilience and health of our oceans. ‘‘It’s this resilience that gives them a living chance in the face of the climate crisis, which they are directly impacted by,” said Greenpeace Africa climate and energy campaigner Bukelwa Nzimande.

Divers of Ghost Diving and Greenpeace documented a kaleidoscope of underwater flora and fauna, including yellow-tailed mackerel, striped bream, various calcareous algae, soft coral and crustacean species that thrive in these oceanic ecosystems, ideal for their similarity to coastal regions. Mount Vema rises from the seabed at 4600m to just 26m below the surface of the ocean. The upper slopes and plateaus are covered in soft corals, seaweed and kelp forests, teeming with life.

The population of Tristan Crayfish is of particular interest: having been fished to the brink of extinction twice in the past, divers observed dozens of the spiny lobsters on Mount Vema. The population is, therefore, showing signs of recovery; it is a testament to the resilience of the ocean and motivation to ensure that this resilience is safeguarded by multilateral protocols such as the Global Oceans Treaty.

“Marine life in these unique areas are able to flourish and entire species recover, provided that the right measures are established and implemented. This is why the creation of ocean sanctuaries through an instrument like the Global Oceans Treaty is not only necessary, but critical. Current protections are insufficient and poorly implemented; we need real action to protect life in our oceans and further build resilience on a planet in crisis,” continued Nzimande.

Abandoned fishing gear, known widely as ghost gear, poses a major threat to living worlds like those on Mount Vema, and Greenpeace has been campaigning for consistent measures against ghost gear pollution in the oceans. Lost or abandoned lobster cages, artefacts of destructive industrial overfishing, still threaten Vema’s wildlife. The team of divers onboard the Arctic Sunrise were able to retrieve one cage at a depth of about 35m – no longer in use, yet still a deadly trap for fish, crabs and other marine animals.

An estimated 640,000 tonnes of abandoned or lost fishing equipment, or ‘ghost gear’, enter the ocean every year, the equivalent in weight of more than 50 thousand double-decker buses. In total, they make up around 10% of the plastic waste in our oceans, entangling and killing marine life, according to a new report released by Greenpeace Germany.

The report shows that 6% of all nets used, 9% of all traps, and 29% of all longlines (fishing lines that are several kilometers long) pollute the sea unrecovered after use. Not only does old fishing waste continue to maim marine life, but it also seriously damages underwater habitats. Seamounts are particularly vulnerable, often being heavily fished due to the range of marine wildlife around them.

Greenpeace is calling for more decisive action against deadly ghost gear, including a strong Global Oceans Treaty at the United Nations that could protect at least 30% of the world’s oceans by 2030, by making them off-limits to harmful human activities, including industrial fishing.