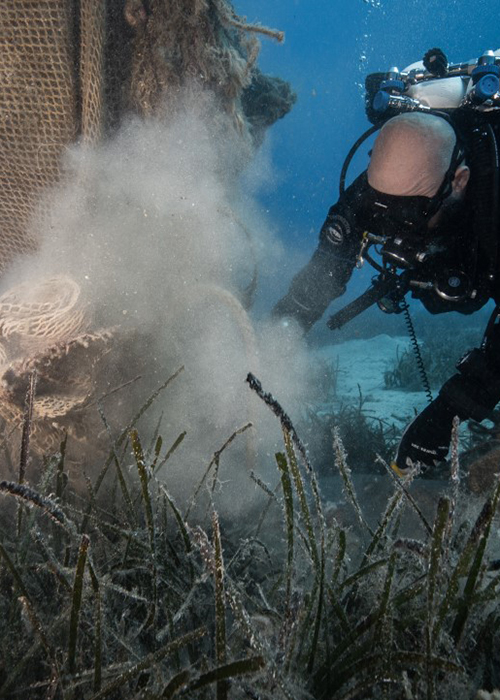 A pilot project in Cyprus

In its continuous efforts to help clean the seas from the fishing industry’s negative impact, Ghost Diving Lebanon looked across the Mediterranean Sea to Cyprus, its neighboring island.

After getting intel from locals about discarded fishing gear at multiple locations around the island, especially in areas where green sea turtles nest and forage, Ghost Diving Lebanon decided to plan a mission beyond its borders, with support from Ghost Diving and Healthy Seas and in collaboration with local divers and dive the Rock (a technical diving facility established in Protaras Cyprus and ran by Julio Halal).

The island is a haven for vacation seekers, formed of beautiful beaches and sandy coasts, attracting people from all over the world and catering to the demands of fresh sea food, so it’s not surprising that there is plenty of fishing activity.

On a frequently visited dive site, at a depth of 30 meters, they found an upright standing net hanging in the blue water column, where the base of the net covered a patch of sea grass, suffocating the plants and causing their demise.

An initial survey was conducted by the team, during which multiple crabs were found entangled but still hanging on to life. They were cut loose and set free again while the team made plans for the cleanup operation which took place two days later.

Below water, time is limited for the divers therefore, physical efforts need to be controlled, safety measures adhered to, and team communication should be pristine.

Three divers dropped in the clear blue waters, located the net, connected the lift bags and then started disconnecting the net from its attachment points to the bottom. Once these steps were done, about 50 kgs of trawler nets were safely lifted and handled by the rest of the team on the boat that examined it or living organisms.

We look forward to more cleanup projects in Cyprus in the near future.