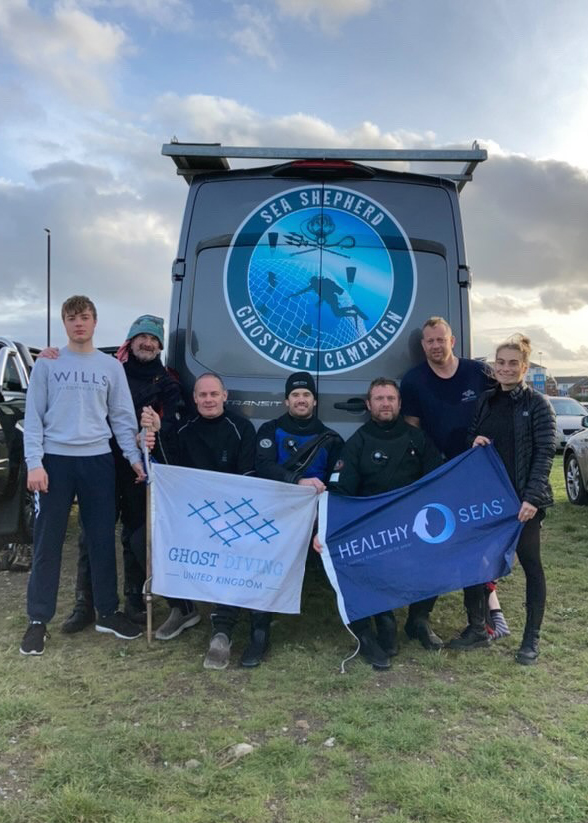 Thankfully, there are many organisations working to combat this problem internationally. Specifically in the UK, several marine conservation groups have thrown themselves into the fight against ghost gear, carrying out cleanup projects with expert divers.

To reduce the response time to reported sightings of ghost gear and to widen their geographical reach, Fathoms Free, Ghost Diving UK, NARC and Sea Shepherd Ghostnet Campaign have decided to form a coalition to combine their extensive resources and improve efficiency. The new coalition will be named the UK Ghost Gear Coalition.

From now on, when members of the public report ghost gear sightings on the platform of one coalition member, the data will become immediately available to all members of the UK Ghost Gear Coalition (UKGCC). This will ensure the quickest and most efficient response, minimizing travel times by using the closest resources available.

Retrieving ghost gear is demanding in terms of logistics, and the coalition aims to meet these demands in the best way possible. By utilizing divers who are most closely located to the reported sighting, response times will be dramatically reduced, and the carbon footprint will be significantly reduced.

As well as these improvements in efficiency, UKGGC members will work together to ensure safe practices and use each other’s experiences in a program of continuous development.

The coalition also aims to build awareness of marine pollution and the ghost fishing phenomenon by participating in school programs and public events.

The UKGGC is open to working with other organisations dedicated to removing ghost gear from the sea before it harms marine life or reaches our shores. If there are any other organisations who would like to join the coalition and work with us, then please contact us.