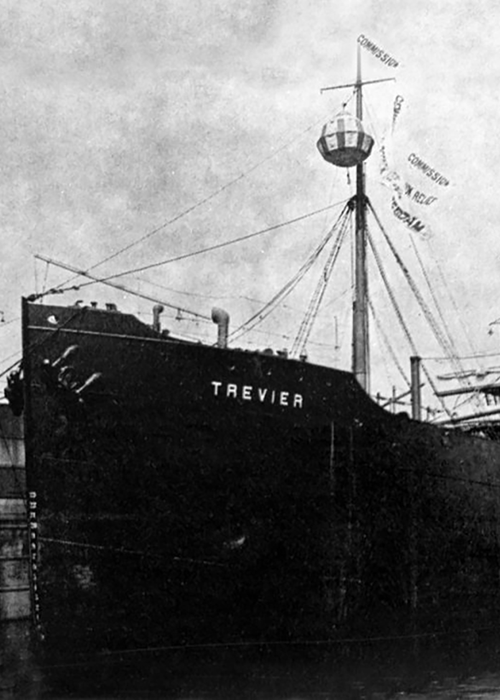 The Ghost Diving Foundation has been working all over the world for years to clean up seas and oceans of lost fishing gear. One of our most important operating areas is the Dutch North Sea. A popular dive site in the North Sea is an unidentified wreck which fishermen named "Rode Poon” after the North Sea fish species that they frequently caught on and around the wreck.


The result of decades of fishing unfortunately very visible at the wreck, where an immense amount of all conceivable types of lost professional and sporting gear is found. Therefore, divers of the Ghost Fishing Foundation decided in 2013 to focus on this particularly polluted shipwreck and have since salvaged a few tons of gear at this location.

On August 4, 2018, during a ghost net recovery dive at this shipwreck in the framework of our activities for the  “Healthy Seas” initiative, Ben Oortwijn (26) from Ijmuiden, a Ghost Diving volunteer diver and passionate North Sea wreck diver, discovered the production plate of one of the donkey boilers of the ship as he was trying to get to a piece of fishing gear which appeared to be hooked behind it. ('Donkey boilers' on ships served as a hot water supply when ships were in port and the main boilers were not in use.)


Removing objects which belong to shipwrecks is only allowed during exceptional cases and such this was since the plate, which was already relatively loose, could help identify the shipwreck!


As soon as Ben surfaced, the plate was cleaned on board the divers’ boat and that is when it became clear that the manufacturer and the serial number of the boiler were still legible. This gave good hope that the shipwreck could be identified, and Ben, with help from fellow North Sea wreck divers, decided to devote himself to further investigation to find out which ships had been lost in 1st and 2nd world war situations in this specific area of ??the North Sea.


Following this research, a list was compiled of possible ships that met the dimensions of the single-propeller wreck. Contact was made with the Lloyd’s Register Foundation, that upon looking at the inspection report of the boiler in question and comparing the list with the information known to them, made the final decision: the production plate found belonged to the Belgian steam cargo ship S.S. Trevier.

The Belgian Relief ship S.S. Trevier was attacked during the First World War on 4 April 1917, on her way from New York to Rotterdam with a load of 4200 tons of grain. She was torpedoed off the Dutch coast near Scheveningen by the German submarine UB-23. This was very unusual since it was a clearly marked Relief ship that should be given safe passage from New York to Rotterdam. Fortunately, the ship did not sink immediately after the attack, so that all 24 people on board, of which 8 were injured and 6 seriously injured, could enter the lifeboats and be picked up by fishermen after a few hours of . They were safely brought to IJmuiden and the wounded were treated there. The wreck of the S.S. Trevier rests, since that fatal day, at the bottom of the Dutch North Sea at a depth of approximately 29m.