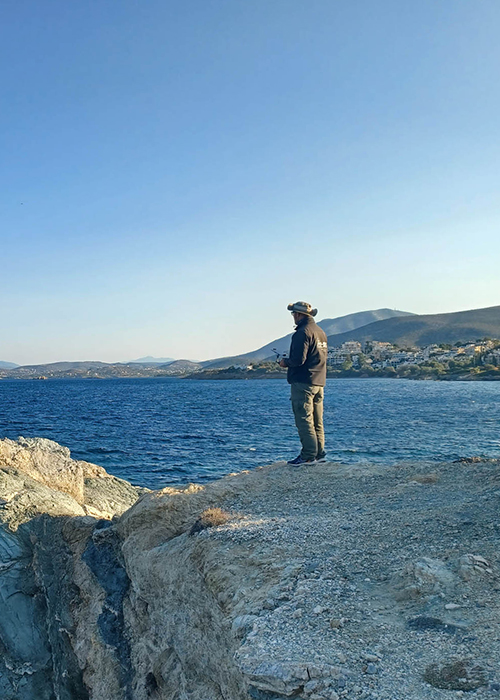 This June, Ghost Diving embarked on an innovative expedition to map areas of the coast using aerial drones & underwater transects in an effort to quantify the extent of ghost gear in Greek waters. The project was funded by The Ocean Conservancy’s Small Grants Program– Global Ghost Gear Initiative (GGGI).

Across the course of this month, Nikos Vardakas, coordinator of Ghost Diving Greece has been working with Sol Milne, a researcher from the UK to survey large stretches of the Greek coastline, in Attica & Fthiotida, in search of lost & discarded fishing gear.

In total they covered 15 square kilometers of coastline across 17 sites. Covering this amount of area in such a short time was ambitious, but they managed, with a lot of early morning starts! Beginning at five am each day, they went to each site to fly the drone while light conditions were suitable. This is the time when you’re most likely to see wildlife & able to observe the coastline before people arrive, so being able to observe these areas along the coastline was a very special part of the expedition. In total, they collected 21’041 images from across the sites, which are now being analyzed for the presence of nets & plastic debris.

Once images had been collected, they returned to several of the sites to conduct line transects by scuba diving. With a GoPro attached to the front of the DPV, Nikos traveled up to 2 km along sites that had been surveyed by drone, recording all the way along in search of lost fishing nets. The aim of this was to see what we could spot from above & below, so we can see to what depth the aerial surveying is effective. The results show that there is a large amount of lost gear along the Anavyssos coast, lost from both artisanal fishing activity & commercial fish farms. Jordan Allured & Thanos Chondros also assisted in these dive surveys, skippering the boat & working to identify lost gear underwater.

During this collaboration, they developed aerial surveying methods to better see into water with rugged & complex bottom topography, in order to locate lost fishing gear. They also developed a line transect method to confirm these findings & study the density of lost gear in every site surveyed- highlighting how widespread this issue is across the country.