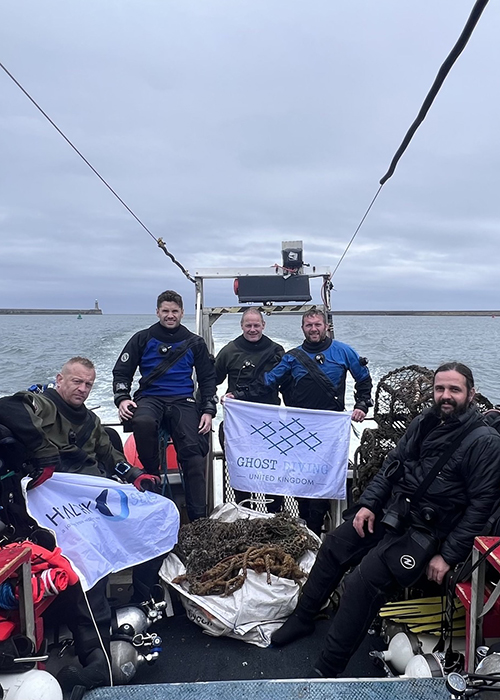 Over the last few months Ghost Diving UK has received many reports of Ghost gear. As well as reports from divers we have been surveying wrecks from Eyemouth to Tynemouth running out of North Shields and Seaham harbour.

The Seaham area has a rich maritime history and provides some fantastic diving.

Thanks to Spellbinder 2 and skipper Alan Lopez for taking us on a survey to investigate a wreck covered ghost nets South is the Tyne, where we took the opportunity to lift and disarm ghost gear during what turned out to be some choppy conditions with low visibility below.

Spellbinder 2 is also used extensively for surveys along with the team rib, provided by DIR wreck divers.

Lots of the trawlers nets we’ve found during surveys sit at some challenging depths but are creating a hazard to local divers, one dive boat skipper informed us he’s stopped diving a popular wreck as the trawler net covering it just too dangerous, with a few near misses divers have become entangled while descending onto the wreck, he has asked us to plan the removal at the earliest opportunity.

In the next few months, we’ll endeavour to remove everything we can before the winter weather makes things more difficult.

Thanks again to The Fifth Point diving Center Blyth, who have provided logistical support and advise, without which we couldn’t operate.

The Fifth Point is a no touch, no take Dive Centre. This means that nothing will be removed from the ocean, except for litter and marine debris of course!

We’re looking forward to removing as much ghost as possible over the next few months and hopefully will host Heatly Seas in the North England very soon to run one of their amazing education programs with local schools.