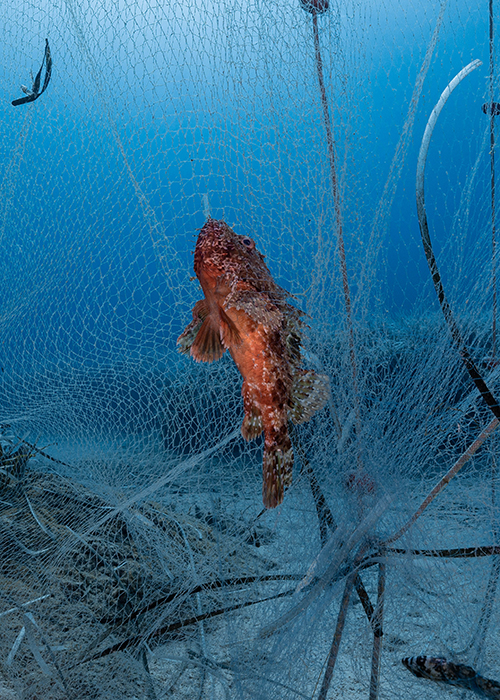 Every dive for us is a scouting attempt for ghost nets or left behind fishing equipment that could cause harm to the environment.

During one of our regular dives, at one of our favorite dive sites, rich with marine life, healthy Posidonia oceanica grass, marine animals such sea turtles, common sting rays, eagle rays and lots more, turned out into a ghost net removal of an illegal type of gill net forbidden in Cyprus.

These specific types of gillnets are banned from use or import for several reasons, starting with their very small gauge size that results in the capture of small specimens and species that form the foundation of any healthy ecosystem.

Other obvious reasons are the compound materials that these nets are made of, such as transparent plastic lines weaved in a death mesh, that tend to entangle anything that comes in their proximity.

At 20 meters of depth, a wall of discarded gillnet suddenly appeared, standing upright from the bottom. As it slithered its way along the seabed and up to the shallows, it wrapped itself around big pinnacles which might have been the reason for it was discarded in the first place.

This ghost net, almost fully transparent and barely visible up until the moment you come very close to it, spread for more than 400 linear meters. Caught inside it was a substantial number of small fish from different native species to the Cypriot waters such as Damsels, scorpion fish, colored wrasses, juvenile sea breams, rabbit fish, sol fish, and others that are considered invasive from the Red Sea such as trumpet or cornet fish, lionfish and much more. The dive site has resident turtles and frequently seen rays, therefore not removing it was out of the question.

For more than 90 minutes, we tried our best with the amount of gases that we had on us and equipment available to us on that scouting dive. We stayed at various depths, collecting and folding over the discarded pieces of net with caution. There is a high-risk factor when handling such a type of net underwater and also there is always the possibility of getting entangled ourselves.

With each fold, we looked for and freed any species still alive and removed the ones that were not so fortunate. A ghost net will do what it is designed to do: trap and kill. When that happens, other creatures come to feed on the prey, and they also get entangled. We call this the cycle of death, and this cycle will keep on happening up until that net is removed from the water, or it disintegrates. For a plastic net that will take hundreds of years.

By the time we hit minimum gas reserves and had to surface from our dive, we had already bundled that discarded ghost net into the smaller volumes, making it less damaging.

The second day, it was time to go back in the water and finish what we started. We scootered our way to the location and prepared the bundles for being lifted to the surface. More fish had been caught in the net overnight. We were able to rescue a big scorpion fish that was still holding on to dear life, which we carefully handled due to its poisonous spines, and set free to give it a chance to survive.

After careful management of the bundles, lift bags were attached and the team sent out the nets to the surface, where the boat was ready to pick them up.

As this unfortunate event shows, conservation is not only about underwater cleanups but should also be coupled with educating about the severity of using such nets on the short and long run.

Today’s uncalculated actions result in severe consequences for the future for the environment, fish diversity, quantity, and the ecosystem we all share and depend on.

Imad Farhat is the coordinator of Ghost Diving East Med, an underwater photographer and videographer and GUE diving instructor.