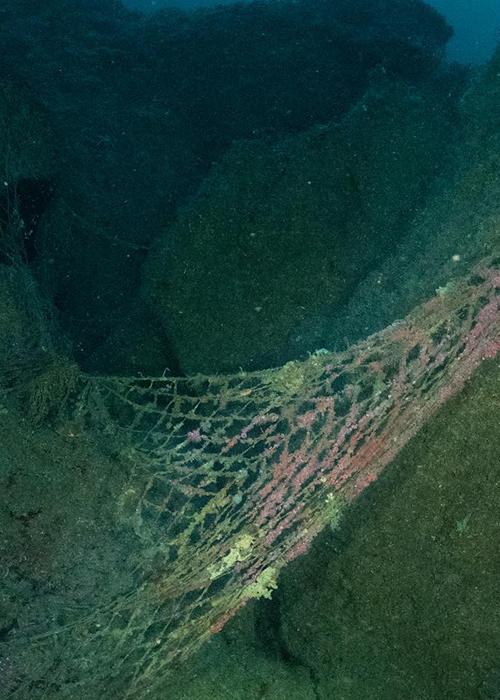 On September 10th, 2022, Ghost Divers set out to survey the wreck of the Moody off the Port of Los Angeles, California, USA. The Moody is a Wickes-class destroyer that is 314 feet long that was commissioned in December of 1919 and assigned to the pacific fleet. She was decommissioned in June 1930 and set for disassembly. In 1933 she was purchased by MGM for the movie “Hell Below”. The Moody was remade to look like a German destroyer for the movie. On February 21, 1933, crews detonated explosives placed between watertight compartments with the hope she would float after the explosion. Unfortunately, another series of explosions damaged the watertight compartments and at 5:30 pm she sank. She rests in approximately 150 feet / 45 meters of sea water. The two halves of the wreck are about 111 feet / 36 meters apart.

The survey team (Jim Babor, Karim Hamza, and David Watson) set out with the objective of collecting GPS data to pinpoint the locations of the net on the wreck. The survey team found that there were 5 areas of the wreck holding nets with a significant concentration of net being found at the stern. Pictures, video, and survey notes were collected. The use of a Gramper GPS locator helped the team to determine the precise geo location of each net, and was key in developing a plan of action that would make the clean-up mission the following week more efficient and safer.

The Ghost Diving team returned to the Moody on September 17th, 2022 for a clean up mission. There were two teams of divers, a closed-circuit rebreather (CCR) team (Jim Babor, Karim Hamza, and Nir Maimon) and an open-circuit (OC) team (Jung-han Hsieh, Norbert Lee, and Mark Self). The teams agreed to take one half of the wreck each. The CCR team descended first to stage the lift bags for both teams and set off to their half of the wreck so that the OC team would not waste any time and could go straight to work. So following a carefully planned schedule, the OC circuit team descended 15 minutes after the first team upon the wreck and began removing net from their half of the wreck. The CCR team had planned a 3 hour dive and was happy to report that their dive was shorter than anticipated at 2 hour. They attributed this efficiency to the use of the geolocator. They were able to plan their dives with a high level of precision because they knew exactly where they needed to go and how long it would take them to get there. They were able to successfully remove the majority of the net from the wreck and plan to monitor the status of the remaining net.