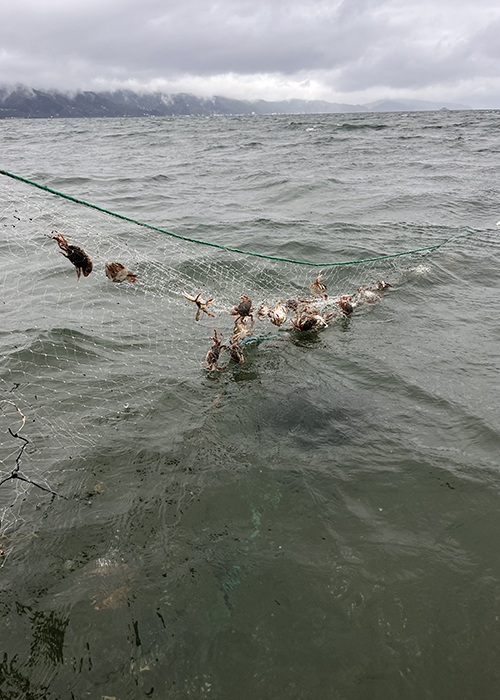 While on a morning beach walk, Ghost Diving New Zealand team member Erin Hewetson noticed two large plastic jugs floating close to shore. Knowing this was likely a lost fishing net, Erin called for help from her sister, and they got to work pulling the net ashore. Makeshift weights had been attached, made simply by filling reusable bags with sand and rocks that obviously weren’t sufficient to keep the net in place.

Pulling the net out of the water ended up being the easy part. The net was around 50-60m long and had managed to entangle hundreds of crabs – we were able to shake some of the larger ones free, but for many we needed to cut the net. It took well over an hour to release all the crabs and return them to the water safely! All the crabs were alive when we released them and luckily none of the local birds or dogs attempted to eat them on their back to the ocean.

We only had one knife with us so we had to use whatever we had available – including sticks and socks as gloves (this doesn’t work, trust me!).

The net was collected into a bucket and taken home where it will now be put to better use. We’re very grateful we were here at the right time to be able to rescue these special creatures – and happy to know this net won’t damage any further marine life.