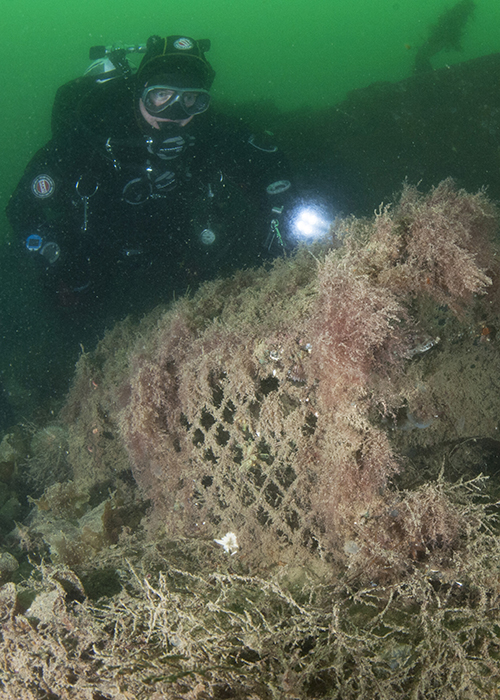 In September of 2015, 12 divers from the UK and the Netherlands gathered together in the Orkney Islands, off the North coast of Scotland. Nestled within the archipelago lies Scapa Flow, the world famous venue for wreck diving. However this week was to see a change in focus: the Ghost Fishing Team arrived to remove lost fishing gear from the waters of Scapa Flow.

The Ghost Fishing project was set up by Pascal van Erp, a passionate North Sea wreck diver from the Netherlands. The project has captured the imagination of divers and conservationists around the world resulting with several notable projects in Croatia, Southern California, and now Scapa Flow in Scotland, UK.

For 5 days the divers worked from the MV Halton, skippered by Bob Anderson, and examined the wrecks of the German High Seas Fleet. They identified a number of targets for removal including queen scallop dredges, buckie pots, creels, diver shot lines and general litter including considerable amounts of non biodegradable plastics. A little further afield, off the island of Cava and along the shore at Houton, long strings of lobster pots were found. These strings span over 500m long and yielded over 60 pots and around 1.5km of rope. A significant number of the pots had life inside them, and were clearly continuing to fish, sadly with no means to land the catch. The ropes have also been identified as a hazard for the local seal populations, as they can become entangled and drown.

During the operations, extensive surveys on the life that colonized the structures, was carried out by Dr Joanne Porter of Heriot Watt University.

Time out of the water was not wasted either: the team also found a fishing net washed up on the shore at Billia Cru. This weighed in at over 500kg. These nets will drift at sea and continue catching fish, cetaceans and other marine mammals.

Many of the pots were returned to the local fishers, and some will be used by researchers at the local Heriot Watt University Orkney Campus for a project to investigate the efficiency of biodegradable escape panels in creels for the return of juvenile and undersized shellfish to the sea. The nets were removed by Healthy Seas initiative, who recycle them into clothing. The ropes found an especially interesting home, and will be used by local Orcadian Mark Cook, who constructs woven doormats and door stoppers from marine debris

The project team would like to thank our funding partners formed from a joint initiative by Healthy Seas, World Animal Protection and Ghost Fishing. These groups are part of the Global Ghost Gear Initiative, dedicated to ensuring cleaner, safer oceans and supporting sustainable solutions to the ghost gear problem.