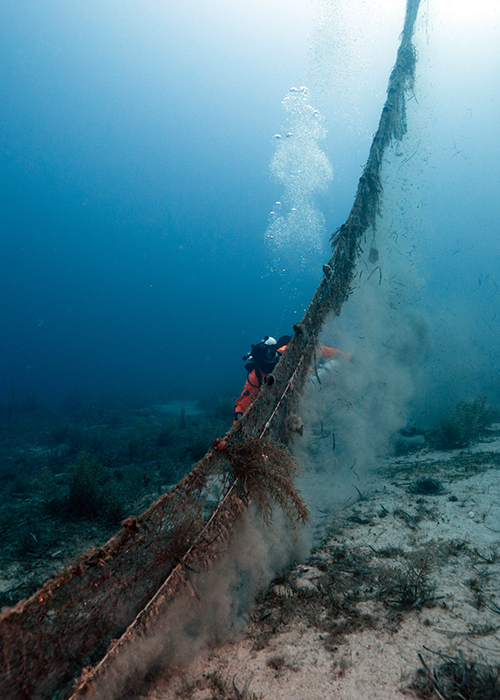 At the end of November, we seized the opportunity to resume our recently launched surveys in Cyprus. This country, located in the east of the Mediterranean Sea and surrounded by clear blue seas, has of course suffered a lot in recent decades under the pressure of, among other activities, fishing. We visited several areas in one week, of course well-known dive sites, but also places that are still relatively unknown to divers and rock faces that are attracted by fishermen. Fishing is allowed in some areas, but not everywhere. Yet we found lost fishing gear in both areas, as we are used to in our work.

Following our surveys this week, we focused on several days of net recovery in the Marine Protected Area of Cavo Greco, also known as Cape Greco. There is a drop-off at the edge of the area which starts at a depth of 50m and is where locals say nets should be placed in the past. This was accurate enough, locals took us there and it hit the spot: we found a gillnet extending from the drop-off to the shallower part somewhere in the 40-30m range. The fishing net had been down there for a very long time, this was reflected in the vegetation on the net. But it was also immediately clear that the net was still catching marine life, we saw quite a few remains in and around the net. Another interesting fact we discovered was the technique used to make the net heavier to stay on the bottom. This technique with simple stones used, was so old that we saved it for the fisheries organization to inspect and get a better idea of the pollution in the area.

Due to the very good visibility on site, we removed several hundred meters of gillnet with a team of three people, including a photographer. Due to the depth, bottom time was of course limited, but our usual procedure of using trimix mixtures at depths in excess of 30 m allowed us to achieve this in a safe manner. The start has been made, the evidence has been collected and we are already working on the next plans. Cyprus will also become a lot cleaner and safer in the near future.

We were able to achieve this successful mission in part thanks to the great support of dive center Dive the Rock.